In creating a podcast on Chicago history, co-host Christopher Lynch and I have discovered quite a few place and street names with origins reaching deep into the city’s past, often going back to Native American people and languages.  These fascinating tidbits were sprinkled into the podcast to spice up our storytelling.

This adventure began by learning about the word Chicago, or as the French recorded the Algonquin pronunciation “Chicagoua” which means “skunk,” and was also used to identify the wild onion growing in the area known as ramps, and detailed in the first episode of the podcast.  This led to Chris buying a bunch of ramps, at the Farmers Market in Daley Plaza, which we cooked and tasted in our third episode.  And yes, they were tasty!  So, I thought it would be fun to share ten additional place names we ran across so far in creating the Windy City Historians Podcast. 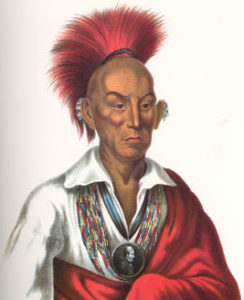 Blackhawk – a street and professional hockey team in Chicago named after the Sauk American Indian war leader “Ma-ka-tai-me-she-kia-kiak” or “be a large black hawk.”  He fought with the British during the War of 1812 and in 1832 instigated the last Indian uprising east of the Mississippi and led incursions into the new state of Illinois.  He was captured on August 27, 1832, and with other war leaders taken on a tour of eastern U.S. cities.  Before being released he told his life story to interpreter Antoine LeClaire of Milwaukee, which was edited and published by newspaper man J.B. Patterson.  The resulting, Autobiography of Ma-Ka-Tai-Me-She-Kia-Kiak, or Black Hawk, Embracing the Traditions of his Nation, quickly became a bestseller and reprinted in numerous editions.  This success raises the question of whether he ever received any royalties, which a simple internet search left unanswered .

Photo of a Calumet at The British Museum

Calumet – the name used for several rivers in the Chicago area – the Calumet, Little Calumet, and Grand Calumet Rivers – and an American French word for the ornamental and ceremonial peace pipe used by Native Americans as an emblem and in rituals to express friendship between different tribes or individuals through the act of sharing the pipe to sit, talk, and smoke. 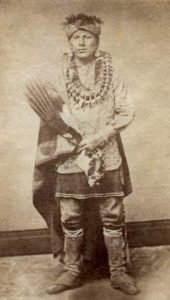 Illinois – the 21st state in the Union and French spelling of “Hileni” or “Illiniwek” an Algonquin nation which in the 17th Century was the powerful confederation of the Peoria, Kaskaskia, Tamaroa, Cahokia, and Michigamea tribes.  In the mid-1600s, they decimated the Ho-Chunk (or Winnebago) to take most of the upper Mississippi Valley and Lake Michigan area previously held by the Ho-Chunk.  The Illinois were the Indians who asked Father Marquette to visit them, he interpreted as come and evangelize them.  This led to his three trips to the Illinois peoples.  First in 1668 or 1669, a 30-day one-way trek to their villages, most likely, along the Des Moines River in Iowa, then with Louis Jolliet on their voyage of discovery to their villages on the Illinois River in 1673, and subsequent return to the Illinois and their main village across opposite Starved Rock on the Illinois River in 1675.

Kinzie Street – a Chicago street named after John Kinzie, a British Canadian who learned silversmithing and was a prominent fur trader in northwest Ohio and the Indiana territory.  In 1804, he moved his family into the Jean Bapiste Point de Sable estate across the Chicago River from Fort 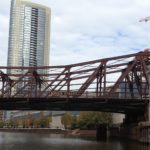 Dearborn.  He is known to have murdered Jean Lalime on the evening of June 17, 1812 outside the main gate of Fort Dearborn, he thereafter referred to as “an unfortunate incident, ” but was never put on trail.  It can be argued Kinzie was a double- or triple-agent at different times during the War of 1812 providing information and support to the British, Americans, and Native Americans, depending on circumstances.  He and his family returned to Chicago in 1816 after the war and were one of the most prominent families throughout the early history of Chicago. 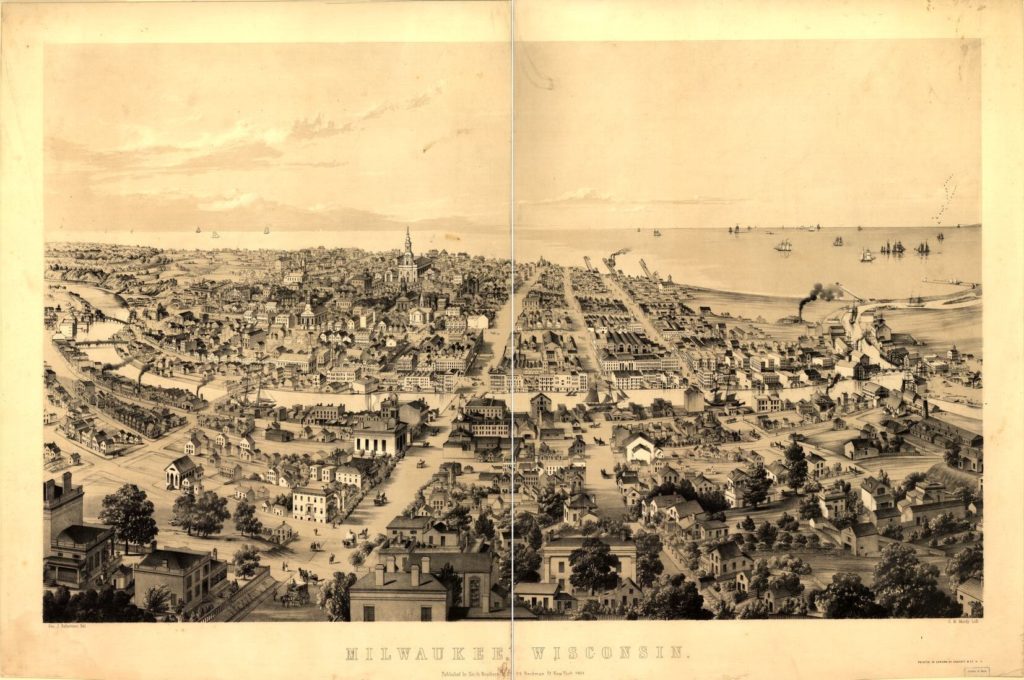 Milwaukee – the city was preceded by an Indian village of the same name, meaning “fine land” or “pleasant place” in Algonquin.  French traders operated trading posts there as early as 1743 and it was home to several French trading families headed by Jacques Vieau, Jean Baptiste Mirandeau, Alexis LaFramboise, Antoine Le Clair (the interpreter for Blackhawk’s autobiography), and Laurent Solomon Juneau.  They frequently interacted with Chicago traders and by 1834 Milwaukee experienced rapid growth, but never matching the pace of Chicago.

Sauganash – a north side Chicago neighborhood, trail, park, and elementary school originates with Billy Caldwell‘s (1782-1841) Indian name, which meant “English speaker” or “Englishman.”  His father was a British officer and mother a Mohawk woman.  He became a British-Indian fur trader, a clerk and friend of John Kinzie, a lieutenant to Tecumseh during the War of 1812, and later an advocate and Indian Agent for the Potawatomi, Ottowa, and Chippewa tribes.  Mark Beaubean who built the Eagle Exchange Tavern in 1829, the earliest non-residential building in Chicago, expanded this enterprise in 1831, and re-named it the Sauganash Hotel in honor of his good friend Billy Caldwell. 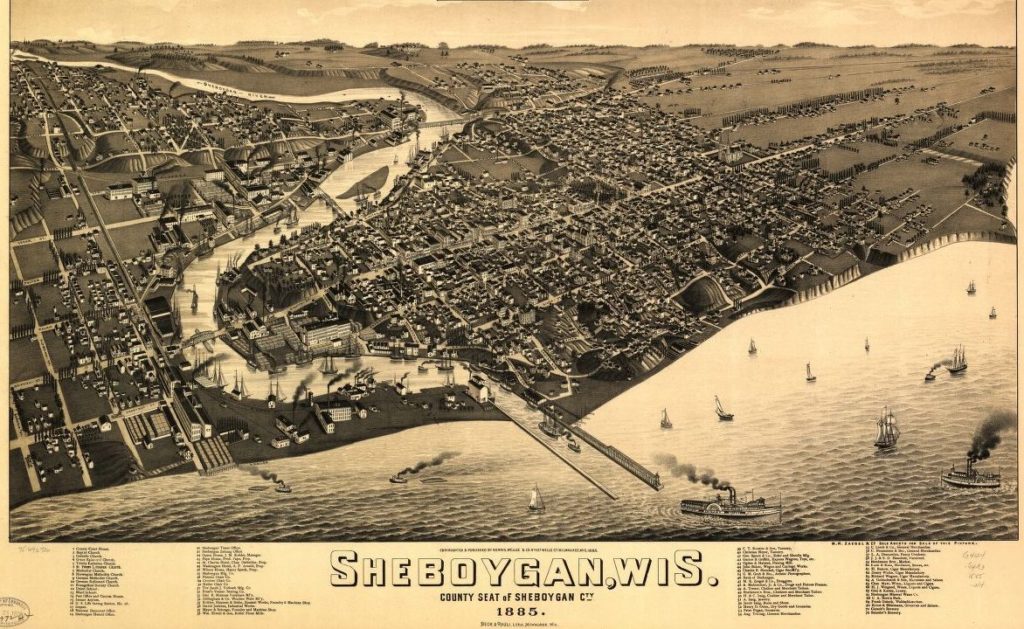 Sheboygan – a city on Lake Michigan in Wisconsin that comes from the phonetic spelling of “shab-wa-wa-go-ning” in Potawatomi, “saw-be-wa-he-son” in Menominee, and “jâbonigan” in Ojibwa meaning “needle” or some kind of piercing tool, which likely also refers to the reef approximately three-quarters of a mile off-shore and a few hundred yards northeast of today’s harbor entrance and mouth of the Sheboygan River. 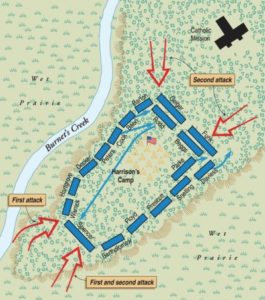 Overview of the Battle of Tippecanoe

Tippecanoe – is the name of an Indiana river, county, and battlefield from a Miami-Illinois word “kiteepihkwana siipiiwi” meaning buffalo fish.   The Tippecanoe River flows into the Wabash River near the village established by Tecumseh and his brother the Shawnee Prophet in early 1805, which Indiana Territorial Governor William Henry Harrison and his militia planned to attack in November 1811 and led to the famous battle-ground with the same name. 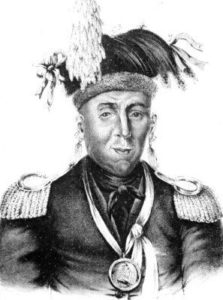 Wabansia – a Chicago street on the north side, also Wabansia Addition on the earliest Chicago maps, named after the Pottawatomie chief Waubansee (by various spellings) meaning “a little eastern light” who’s village was on the Fox River near Aurora and wintering on the Kankakee and Illinois Rivers.  He took part in the Battle of Fort Dearborn to protect John Kinzie’s family from atrocities and much later signed the Treaty of Chicago of 1833.  A year after he protested the treaty claiming Billy Caldwell, Alexander Robinson, and Joseph LaFramboise had not well represented the tribes.

Wells Street – a Chicago street named after Pennsylvania born William Wells (c. 1770-1812).  His family moved to Kentucky and was subsequently attacked by Miami Indians, and his father was killed.  William, at the age of 13, was taken captive.  Adopted into the tribe he became known as  Apekonit, or “Wild Carrot,” likely a reference to his red hair and manner.  In 1790, he married An-ah-quah the sister of Little Turtle (Michikiniqua) the great Miami war chief.  The couple had four children and Wells fought with the Miami against the Americans until 1791.  In that year, after visiting his biological family in Kentucky, he changed allegiances and worked for General “Mad” Anthony Wayne as an Indian Scout and fought on the American side in the Battle of Fallen Timbers.  Wells was the chief interpreter at the subsequent Treaty of Greenville of 1795.  His first wife An-ah-quah died some time between 1800 and 1806, and afterward Wells married Wa-nan-ga-peth or “Sweet Breeze,” Little Turtle’s daughter.  The couple had two children before Sweet Breeze died in 1808.

In 1809, Wells married a third time to Mary Geiger and they had two children.  By this time Wells was the Indian Agent at Fort Wayne, frequently working for Indiana Territorial Governor William Henry Harrison.  In 1812, he was killed on August 15 at the Battle of Fort Dearborn and enemy warriors carved out his heart, cut into pieces, and ate it in a show of respect, honor, and potential means of acquiring some of his strength and courage.

This entry was posted on Tuesday, June 11th, 2019 at 5:57 pm and is filed under Chicago, Chicago, Chris Lynch, Patrick McBriarty, Windy City Historians. You can follow any responses to this entry through the RSS 2.0 feed. You can skip to the end and leave a response. Pinging is currently not allowed.