Reprinted from: 2017 Yachting in Chicago magazine published by the Chicago Yachting Association (CYA) 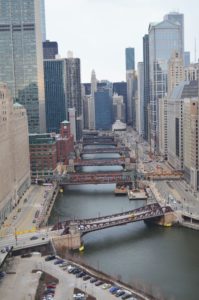 Chicago is a dynamic ever-changing city with a rich history closely tied to the Lake, its rivers and canals.  Yet, the bridges crossing our waterways are often over looked and taken for granted unless up for repair or viewed on a river run.  Most boaters know of the bridges, yet how much deeper have we looked at these magnificent structures – beyond their dance of conveyance and obstruction between Lake Michigan and winter storage?

After presenting at a CYA meeting this Spring it was suggested a wider CYA audience might appreciate a taste of Chicago’s rich bridge history.  So here are some fun facts to raise your knowledge of our wonderful bridges:

Chicago is known as the Drawbridge Capital of the World – not because it has the most drawbridges, Amsterdam does, but the Second City is next in line world-wide.  Yet, Chicago has long been known in engineering and architectural circles as the Drawbridge Capital of the World for the number, innovation, and developments in moveable bridge design and construction that occurred here.  As a center for modern drawbridge design, invention, and experimentation Chicagoan’s hold more drawbridge patents than any other city, and we the most different moveable bridge designs of any city.  These milestones speak to our role, particularly during the early 20th Century, for inventing and trying the newest drawbridge designs before anywhere else on earth. 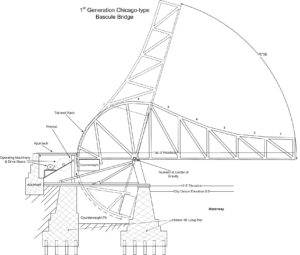 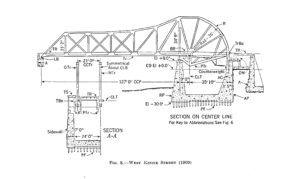 Most of Chicago’s bridges are bascule bridges – as bascule is a French word meaning seesaw (or teeter-totter) describing how these bridges work.  Each leaf (of the single or double-leaf) bridge is balanced at or very near the pivot point with a long arm, reaching over the waterway, and a short arm at the approach holding a counterweight, usually beneath the roadway.  These leaves rotate on a trunnion (or axle) attached to each side of the leaf superstructure at the point of rotation.  These trunnions, typically a large stainless-steel cylinder, are held by large bearing, which connects and supports each side of the bridge to the foundation.  A pit below the counterweight allows the bridge to tip vertically and rotate on the trunnion to open and close.  Almost perfectly balanced a small electric motor is all that is required to open and close even a many thousand-ton bridge.  Today’s bridges operate using 60 to 110 horsepower motors which are about the same power as the engine in a VW Beatle.  To ensure the smooth and reliable operation the City will add re-calibrate the counterweights after modifications, maintenance, or even re-painting to ensure they stay in balance.  Amazingly even something as innoxious as paint can add several hundred pounds to the weight of a bridge. 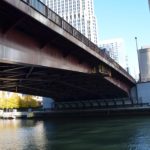 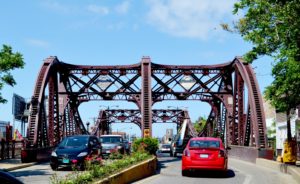 The Chicago-type bascules were first designed by City of Chicago Engineers in 1900 – and the first ever Chicago-type opened to traffic at Cortland Street in July of 1902.  Although now treated as a fixed span the Cortland Street Bridge is still in use today and received Chicago Landmark status in July of 1997.  It is the best remaining example of a first-generation Chicago-type bascule bridge and was modeled after the Tower Bridge in London, England, the world’s most famous bascule bridge. Chicago initially claiming having built the first fixed-trunnion bascule bridge in North America we were soon corrected by Milwaukee which had beat us to the punch having completed the first Milwaukee-style, fixed trunnion bascule bridge at Grand Avenue in March of 1902.

The Columbus Drive Bridge is the world’s seventh longest bascule bridge –built in 1982, it is the best example of the city’s three modern Chicago-type, bascule bridges.  The Columbus Drive Bridge was constructed using eight steel box-girders, four on each leaf, to support the bridge deck to eliminate the tens of thousands of rivets necessary on earlier bridges.  The welded box-girders were fabricated in Pittsburgh, Pennsylvania and floated by barge into the Chicago River and incorporated into the bridge.  Constructed in the upright position so as not to interfere with navigational rights, it successfully raised the level of precision and fit allowing just two points of adjustment.   For when the two leaves were lowered together for the first time this massive structure carrying six-lanes of traffic was off by less than an inch or just 3 cm.  An impressive coordination of engineering, design, and construction!  Chicago hosts two additional modern Chicago-type  bascule bridges at Randolph (1986) and Loomis Street (1978). 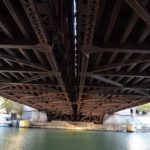 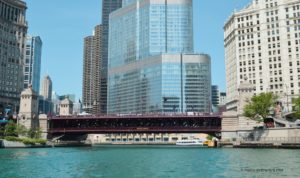 The Michigan Avenue Bridge is actually two parallel bridges divisible down the center – it is one of four double-deck, double-leaf bridges in Chicago, but the only one designed for automobiles on both levels.  Both Wells Street and Lake Street carry ‘L’-trains on the upper and automobiles on the lower levels, while the Lake Shore Drive Bridge was originally designed to carry trains on its lower deck.  Never used for this purpose it added automobile traffic on the lower level in the early 1980’s with the project ot eliminate of the dangerous S-curve in Lake Shore Drive.  Built in 1920 the Michigan Avenue Bridge is the most ornamented bridge in Chicago and features a Beaux Arts architectural style.  The key link between the north and south sides, it led to the development of North Michigan Avenue and by late 1940s had earned the moniker “The Magnificent Mile” and had supplanted State Street as the main shopping and commercial street in Chicago. 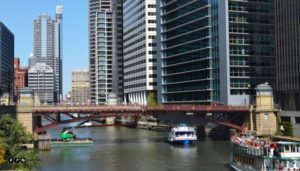 Jackson Boulevard and Lake Shore Drive Bridges are Strauss bascule bridges – while most other bridges in the Windy City are Chicago-type bascules these are patented bridge designs.  Joseph B. Strauss who was born and trained as an engineer in Cincinnati, Ohio, moved to Chicago, and soon established offices in the famous Monadnock Building.  It was there that he received twenty-four U.S. patents, of which fourteen where for his bridge designs.  Strauss is best known as the chief bridge engineer of the Golden Gate Bridge in San Francisco.  What few people realize is he also designed the now iconic, one-hundred year old railroad bridge that stands up in the air near Kinzie Street, that is sometimes referred to as the “Viagra” bridge. 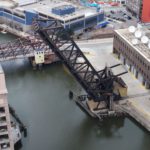 This entry was posted on Wednesday, December 20th, 2017 at 10:33 pm and is filed under Uncategorized. You can follow any responses to this entry through the RSS 2.0 feed. Both comments and pings are currently closed.