The Storm Before Departure

So it is Sunday night and Brian, Melissa (Brian’s girlfriend), Blue, and I had a fantastic dinner at the Lobster Trap Restaurant in Bourne, Massachusetts which was a fifteen minute drive to the other side of the bay.  As I write this we are onboard Dragonfly the rain and wind is lashing the side of the boat.  We are tied to a finger dock off in Onset, MA as the wind pushes us against the fenders protecting the boat’s hull from the wooden dock.  We rock and sway a bit as the boat springs back and forth as the east by southeast wind puffing up to 25 mph buffets the hull.  The wind is predicted to peak around 2 am this evening with gusts as high as 35 mph. 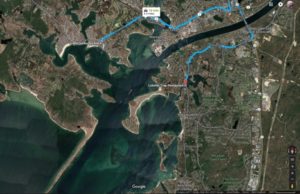 Onset to the Lobster Trap Restaurant

Much better weather is expected behind this front.  I can hear the gusts hit the boat as a low roar moving through the rigging and feel the boat bounce in the chop and wind straining at our dock lines, but we are firmly held by the dock’s heavy wood pilings.

Since arriving late Friday night (about 10 pm), we have been sleeping on the boat, but have access to James & Emily’s house to use the bathroom and laundry. Special needs teachers, James built Dragonfly over the course of about 6-years. His father-in-law stopped by the boat earlier in the day for a couple hours and bragged on James’ effort, skill, attention to quality and detail in building this boat. He related James’ meticulous nature and how he detailed and researched the design and all the components, including the sail plan and the many talks with the designer Kurt Hughes throughout the build and design alternations, such as increasing the head room in the cabins.  Dragonfly is incredibly well built and sturdy without being overly heavy or cumbersome.

We took her (sailors always refer to their vessels as female) for a sail earlier today before the rain. We motored out of the inlet and sailed down the channel onto Buzzards Bay proper and back.  The wind carried from 11-17 knots with several puffs up to 25 or 26 knots, which the boat handled very well.  Even for a catamaran she is quite wide and instead of loading up too much under the full main and 110-percent jib she would spring forward and move right along, yet felt very solid underneath us and really did not heel much, if any.  The empty pots we had left on the stove did not move.  Our sail was in mostly flat water and as we got out onto Buzzards Bay the chop did not seem to bother her too much and we rocked right on through the waves before we turning around to headed back up the channel.  As we sailed out fighting a stiff current we still maintained 6 knots over ground. On the return (both tacks were a reach), we moved along at 9-13 knots ith the current.  So we felt pretty good about the performance of the boat and enjoyed the high freeboard and good view from the raised, yet well protected cockpit. 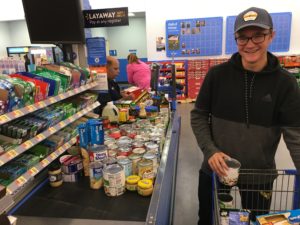 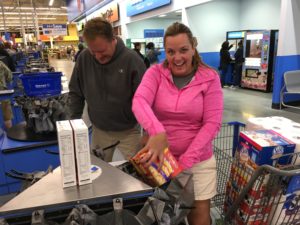 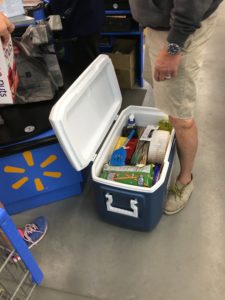 The previous several days were spent getting the boat ready.  We had a full list of things to do such as fill the internal water tanks (but not over fill), fill and stow the additional water jugs, make up the bunks, minor fixes – like the two Y-valves that allow collection of fresh rain water off the deck, and stowing all our gear: kite boards, dive tanks, fishing rods, clothing, cooking supplies and provisions. Since Brian and Blue plan on spending six months on the boat, we provisioned just over $800 in canned and dry goods ands filled the bed of Brian’s pickup truck.  This consumed about 5 hours Sunday to sort and stowaway. Saturday had been mostly spent organizing gear, wiping down, and cleaning nearly every interior surface, and washing dishes, given the boat had barely been used the past year or so.

All the little details, running for parts, and talking with James to get better acquainted with Dragonfly helped familiarize us and extended our confidence in her.  Between the long days, activity, and fresh air we were all exhausted by this evening, especially after the long drive that started late Thursday from Hudsonville, Michigan and into Friday to arrive in Massachusetts.

It’s getting late, so I am going to sign off for this evening.  Hope to write more in the coming days.  The plan is to leave Tuesday as tomorrow (Monday) is expected to still be pretty windy (upper-20s mph) and wavy and allow conditions to improve before attempting the ocean crossing to Bermuda.

Postscript: The storm that blew through that evening created winds up to 70-miles per hour and caused trees to be uprooted and branches blown down. It tore off some roofs and created a good bit of destruction.  Needless to say I did not get a lot of sleep with all the noise in the confined V-berth where I bunked.  As lack of sleep was something I would have to get used to given Brian and I would be splitting the night watches for the several days non-stop sail of Dragonfly to Bermuda on the open ocean. 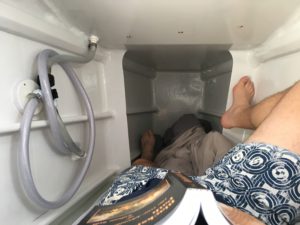 The V-Berth of Dragonfly and the author

This entry was posted on Sunday, November 5th, 2017 at 8:41 pm and is filed under Uncategorized. You can follow any responses to this entry through the RSS 2.0 feed. You can skip to the end and leave a response. Pinging is currently not allowed.