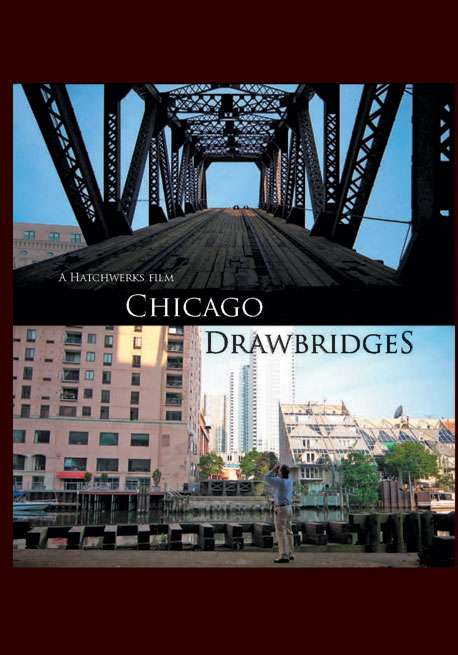 Chicago Drawbridges — tells the story of the city and its bridges.  This 56-minute documentary is narrated by Patrick McBriarty, who after the sudden death of his young wife, tried photography as a hobby to help cope with his loss.  Struck by the ascetics and machinations of these the city’s fantastic bridges, he embarked on what became an eight-year journey unearthing this untold history.  The film chronicles the importance of the bridges in the making of the Windy City, from the first wood footbridge built by a tavern owner in 1832, to today’s iconic structures spanning the Chicago River.

Chicago Drawbridges was independently produced by Stephen Hatch and Patrick McBriarty and is copyrighted by Hatch Werks LLC.

Chicago Drawbridges, “takes viewers on a fascinating, artistic, and historical field trip of Chicago’s drawbridges.  This film is divided into segments, which makes it friendly for classroom use.  Classes across the curriculum, including art, history, mathematics, and science, can utilize this documentary in a variety of ways.”
— Patricia Ann Owens, School Library Journal, June 2014, p. 59.

This is the story of Chicago’s development through the lens of its bridges and how Chicago became the Drawbridge Capital of the World!  It is the companion to the three-time award winning book Chicago River Bridges.

The documentary was aired on Chicago and Milwaukee Public Television and screened in Park City, Utah during the 2014 Sundance Film Festival.  After watching this film you will never look at a bridge the same way.

Purchase a DVD which includes an additional 100-minutes of Special Features.