For a genuine Chicago experience and unique view into Chicago history and infrastructure enlist author Patrick McBriarty for you next program or private gathering.  He has provided outstanding presentations and walking tours for private groups and a variety of conferences, cultural, and civic organizations including:

Select from any of the following programs and be aware each program may be customized to your particular audience to draw from McBriarty’s broad knowledge and research into Chicago history and inner workings of the Second City. 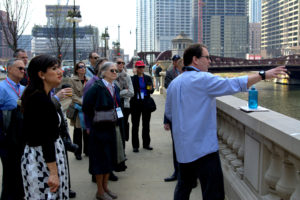 Scheduled by appointment groups of 2 to 25 guided by docent Patrick McBriarty explore Chicago’s amazing drawbridges. Learn all about the history, architecture, mechanics,  and human interest stories surrounding Chicago’s famous drawbridges. Find out about the homeless man living in the bridge, the first drawbridge that pit north siders against south siders, the Dave Mathews’ bus incident, or explore the inner workings of the Michigan Avenue Bridge. This leisurely 2-mile stroll along Chicago’s Riverwalk with views to more than a dozen bridges may be customized to the specific needs of your group. This tour can easily be expanded to include stops at one or more historic local pubs or taverns. (All ages; 75-120 minutes; $150-400, based on group, time, and customization.)

Under the Bridgefluence – From Chicago’s earliest beginnings, both bridges and beer have connected the city. Lift your spirits on a unique walking bridge and bar tour led by tavern and beer historian, Liz Garibay and bridge historian, Patrick McBriarty.  The duo will share stories of Chicago beer and bridge history and relate the interplay between the two in the making of Chicago’s past.  The $25 ticket includes five bridges, four bars, three hours, two miles, and a whole lot of delicious history. Drinks on you.  For tickets and details on the next edition of this tour use this link.

1812 Chicagou; A Scalping, a Murder, and a Massacre – A presentation by author and historian Patrick McBriarty offering an intimate look at Chicago’s genesis story focusing on the five months between April and August of 1812.  Residents of the remote military, French & Indian trading post where during this brief period there is an Indian attack and scalping, a murder at Fort Dearborn, and massacre. The story centers on John Kinzie, the area’s leading fur and Indian trader, who is trying to preserve his family and business, while embroiled in intrigue in the middle ground between the British, Native American tribes, and the land-hungry Americans on the cusp of the War of 1812. (Adults; 50-70 min; $200-275 negotiable based on group, travel time, and permission to sell books and DVDs.) 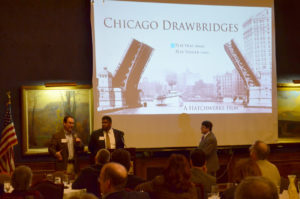 Chicago River Bridges – A multimedia presentation by author Patrick McBriarty on the importance of the bridges in the development of the Windy City from the first wood footbridge, built by a tavern owner in 1832, to the engineering and architectural marvels spanning the Chicago River today. Based on the award-winning book of the same title, learn how Chicago emerged as the Drawbridge Capital of the World with stories of floods, fire, politics, and innovation. (All ages; 60 min; $200-750 negotiable, based on group, travel time, and permission to sell books and DVDs.)

Chicago Drawbridges – Meet the filmmakers and screen the PBS documentary Chicago Drawbridges, as aired on Chicago and Milwaukee Public television. This film was also screened in Park City, Utah during the 2014 Sundance Film Festival and follows and is narrated by Patrick McBriarty as he shares his personal journey into the rich and dynamic history of Chicago’s fantastic bridges. After the screening of this 56-minute documentary the filmmakers answer questions to reveal behind-the-sceans and discuss the making of this unique Chicago story. (All ages; 65-70 min; $225-350 negotiable, based on group, travel time, and permission to sell books and DVDs.)

“Patrick McBriarty’s Chicago River Bridge presentation is outstanding.  His knowledge of the history and engineering of the different types of bridges built over the Chicago River was very impressive.  He captivated the attention of our group. This fast-moving multi-media presentation was educational, as well as entertaining.  We highly recommend this presentation.” — Jeanne and Ed Garman, Chicago Area Mensa